girl in the woods

My quest to summit all 48 of New Hampshire's mighty 4,000 foot mountains

I was very excited to hike Mt. Zealand with my dog because she is named after this peak.  See the details of this mountain on my peaks page.  Zealand, or Zee-Zee, is an English cream golden retriever, and an excellent hiking dog. She’s just shy of one year old and has started hiking 4,000-footers in the last few months. I’ve been looking forward to taking her to her namesake mountain ever since we got her last August. My last dog, Tecumseh, was also named after a 4,000 footer, Mt. Tecumseh. I’ve already picked out the name of my next dog, whenever that may happen.  Her name will be Osceola, or Ossy for short. Yes, we have to repeat our dogs’ names several times when asked, but we love mountains. Here’s a picture of Zealand:

My dad and I drove to the mountain from our vacation house in Maine (we had just spent Memorial Day weekend there) and during the ride, he was telling me about his experiences hiking Mt. Zealand in the winter.

“They close off the access road to the trail, so you have to hike all the way up the road, adding on miles to your trip, before you even get to the trailhead!” he said.

As we pulled in to the access road, with the gates open, I thought to myself, Well, aren’t we lucky we don’t have to add on miles! However, that relief was short-lived. A few minutes into driving up the access road, we hit another gate. It was closed. So I laced up my hiking boots and we started our hike. (Tip: tie/twist the laces twice, not just once, before making a bow to prevent the boots from loosening as you begin your trek.)

My dad predicted it would be under a mile up the dirt road before we reached the trailhead, but 2.5 miles later, and after several trailhead-look-alikes that skyrocketed my hopes, we finally hit the end of the road and the beginning of Zealand Trail.

Zealand was an enthusiastic hiker on her mountain, running ahead up and over roots and rocks, then stopping to wait for us to catch up. She probably got in an extra two miles for the day, excitedly running back and forth between us and constantly investigating the trail ahead.  Her exuberance almost proved dangerous at times.  She wove through my legs and poles, causing a couple frightening stumbles. My day-pack wasn’t nearly as heavy as a backpacking or overnight load would be, but my 8th-grade physics class taught me that once I started going down, I would be very difficult to stop. The trail quickly became rocky but was fairly mild in altitude gain for the first several miles.

At mile 4, we reached Zealand Hut. The huts on the White Mountains of New Hampshire are incredible to hike to and stay at overnight. The beauty of the huts is that you don’t have to lug a tent and meals up the mountain with you. I’ve stayed in a few, during both summer and winter. During the summer, a stay in a hut includes a homecooked dinner and breakfast, both of which are delicious. Often the huts have a wide selection of board games/books and an enthusiastic set of caretakers. During the off-season, the huts are only occasionally heated in the main room by a fire and do not include dinner, but are still a fun place to camp. Learn more about the huts at the AMC website. At the hut, we took a break and ate trail mix on the front steps while Zealand made friends with some passers-by.

Between the hut and Zeacliff, the start of the Zealand Ridge Trail, was a wall of mountain. It was in these miles where we gained our altitude.

My lungs and quads were burning as I heaved myself up the wall, thinking of nothing but the top of Zeacliff, and marveling over how Zealand still had so much energy.

At last, we summitted the cliff. As you can see in the picture to the left, we had an astonishing view. Just kidding, all I could see was white.

We had gained enough elevation that the fog-cloud was brushing the tops of the short pines. I could hear the wind swaying the blanket back and forth across the sky we were in, and feel dew droplets formed on my skin. I wanted to reach out and take a piece of the cloud like a cotton ball. However, the only souvenirs I managed to take home from my experience along the ridgeline were my memories.

We had summitted the cliff, but ahead of us, the peak still loomed. The ridgeline trail leveled off after the steep ascent to Zeacliff. It was not above the treeline (being above the treeline is an amazing experience), but the trees were bush-like and short. When we passed by an actual pool of mud, my dad and I walked across the wooden logs. Zealand, however, was not as well mannered. She jumped off the log I was leading her across into the vast expanse of brown. I expected her to get muddy, but I for sure did not expect the mud pool to be OVER HER HEAD! Zee had to swim all the way out to the other side, caking every white hair on her body (including her face!) with dirt except for the fur just on the top of her back and head. Our white dog was now effectively brown, and loving it. I was lucky enough to share in the mud fun when she shook off near me. (I used gators, which are usually used in snow, to cover my boots and they worked well keeping out the mud and other gunk! Recommended!)

The rest of the ridgeline was mainly composed of rock, and I followed Zealand’s muddy pawprints against the pale granite as she led the way, tail wagging behind her.

At last, after over 8 miles of up, we reached the peak of Mt. Zealand. We were surrounded by trees, so there wasn’t much of a view, but the feeling of being on top of the peak you’ve worked your whole day to get up is an incredible feeling. I made a mental checkmark of my 35th 4,000-footer and felt my goal come closer. Here are some peak-baggin’, mountain-conquerin’ pictures. 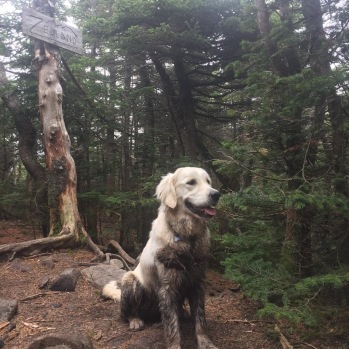 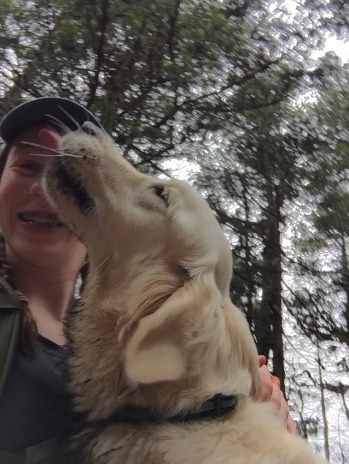 The descent was long, but less physically demanding than the up. The steep parts were technical and tricky down the rocks, but Zealand zipped down them with enough energy to repeat the hike! Towards the end, the bottoms of my feet were killing with each step.  In the last few miles, I tangled my feet in a log and fell on my hip, causing a great deal of pain. The last three miles out were a struggle as I dragged myself out of the woods and debated over which body part hurt the most. The closed access road added over 5 miles to our total distance of 16.5 miles, but I have to admit that I am glad I hiked the extra mileage. It just added to that feel-good sense at the end of a tough hike.

And, of course, my dad and I picked up our traditional ice cream sandwich during the car ride home. Every 4,000-footer we hike, we stop at the closest convenience store on the way out for an ice cream sandwich. It’s (one of) the reasons I keep coming back.

6 thoughts on “Zealand on Zealand”