girl in the woods

My quest to summit all 48 of New Hampshire's mighty 4,000 foot mountains

Mt. Cabot is not a popular mountain. It’s so far north in New Hampshire that the drive is an extra hour or two and the trailhead is hard to get to. From my experience on the trail, I could tell it was the road less traveled. But, as I’ve learned, that can make all the difference.

Since the hike did not seem extremely difficult, we decided to add a couple miles to our trek to make it about an 11 mile loop hike. I think the extra miles for a loop are usually worth it and make for a more scenic trip, rather than than repeating the same trail on the way down.  We started up Unknown Pond Trail and finished coming down Bunnel Notch Trail.

By “scenic” on this hike, I mean there were lots of different scenes, not all of which appeared as New Hampshire White Mountain forests. The first three miles felt like I was walking through a northeast jungle; chock full of wet leaves, pricker branches, and dewy stems. At times, the foliage was taller than I was and sticking out its long arms and legs across the imperceivable muddy path. I could not see my boots below the bushes and often stepped into mud or puddles without realizing it. Worried I might hike right into a bear without seeing him first, I was careful to make plenty of noise while swatting bushes.

With raw and scratched legs, I finally emerged from the jungle onto traditional trail. Like I said, Mt. Cabot is too far north to be a popular hike, so the trail was not well-maintained. I had spent a great deal of my energy bushwhacking and shoving my way through pricker bushes, so I was relieved when we came to a break at Unknown Pond. I did some research but could not find the origin behind its mysterious name. Unknown Pond is the most remarkable and stunning pond I have ever seen. A brilliant mist was settled over the lillies; the Horn peak rising above the fog. I could hear frogs jumping, yet the pond was strangely unrippled and tranquil. It felt as if at any moment, a moose could wander down through the swamp grass and take a drink. Zealand cooled off in the mystically calm pond and swam to fetch sticks. 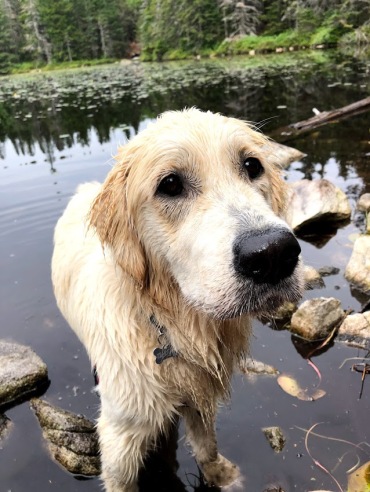 Zealand after her swim

As we continued to hike, the trail began to increase in steepness. Soon, we reached a turnoff to the Horn, a smaller peak with a view lookout. It was an extra .3 miles to hike up to the Horn, but my Dad and I decided to do it. The short push up was difficult, as we had to rock scramble and boulder climb, but at last, we reached the top of the lookout and took our lunch break.

Mt Cabot is part of the Pilot Range in the Northernmost county of NH.  After the summit of The Horn, on our way to the peak of Cabot, we passed over the Bulge which is just shy of 4k (3,950 ft).

To keep myself busy, I worked on figuring out how to chew sunflower seeds and spit the shell out. This is not as easy as it might appear… at all. It was nice to have something other than exhaustion or pain to keep my mind focused on.  When we neared the peak, I could feel it. I felt the altitude we had gained, saw the clearing in the woods, felt the blood rush up my body, felt the excitement. Though the peak was viewless and locked in by trees, I had completed yet another 4,000 footer, and I was happy.

When hiking Mt. Cabot, make sure to follow the sign at the clearing in the woods that seems to be the peak.  The official peak is a very short distance down a side trail. I almost missed it!

We returned to the parking lot via Bunnell Notch Trail. About 1/4 mile south of the peak, we passed by the Cabot Cabin, which has four bunks and a small “kitchen” area. As we neared the end of our journey, tall bushes and grass again seemed to take over the trail. Like I said, though the trail was under-traveled, the stunning pond, panoramic Horn, and the joy of the peak sure made all the difference I needed.

4 thoughts on “A Hike in the Northern Woods”